The Evolution of a Learning Theory

I recently came across an article by M. David Merrill in which he reflects on his search for ways to create effective, efficient, and engaging instruction (Merrill, 2008). Before your eyes glaze over as I talk theory, I’ll quote Merrill’s wise words:

I stopped trying to make all theories agree and force them to form one great truth…I realized that theory building is our puny attempt to understand our world by inventing artificial systems and trying them out against the world.

With this in mind, let’s take a look at a few of Merrill’s theories.

A blast from the past: Component Display Theory

Merrill observed that a teacher can take two paths when it comes to content. She can present the content (expository dimension) or ask the student to remember or use the content (inquisitory dimension).  The content itself can represent a general case (have the value of “generality”)  or it can represent a specific case (have the value of “instance”). Taking this idea further, Merrill proposed that you could divide instruction into four primary categories:

You don’t necessarily use all four primary instruction forms in a given lesson. For example, in a scenario-based elearning module, you might use inquisitory instances one or more times as your instructional strategy (asking the learner to apply principles in specific context-dependent examples) and then use inquisitory generality (asking the student to deduce the general principles from these more specific examples).

The most complete lesson would combine both primary and secondary presentation forms.

Merrill unified these ideas in his component display theory or CDT  (1983). CDT maps presentation forms to types of content that can be taught and performances that can be elicited.

With CDT as a framework, an instructor can come up with a Performance-Content Matrix, as shown by the table below, filling in the blank cells with the specifics unique to his or her own lesson.

Learners “use” content by applying it or practicing. Learners “find” by using information to derive new generalities.

Merrill also emphasized the idea of learner control–instructors aren’t the only ones who can use a performance-content matrix. With the right supports (which can include technology), learners can decide for themselves how many examples and practice opportunities they need to become proficient.

My love-hate relationship with CDT

I confess I have a love-hate relationship with CDT. When you’re trying to help learners tackle complex tasks, it’s a very useful way of identifying instructional strategies. As an ex-scientist, this systematic way of connecting content to performance gives me warm fuzzies, although my artistic side rebels against the notion that instruction  can be reduced to an algorithm.  I’ve found CDT’s a good approach to use when  creating detailed design documents (or my mental versions of the same). However,  having teased apart all the components of instruction, I’ve also found that the big picture can get lost.

In my opinion, this isn’t really an issue of CDT being flawed,  but rather that CDT isn’t the end of lesson or course design that Merrill was striving for.  CDT is very much about micro-strategies after all (Casiello, n.d.). In my attempts to “test CDT against the world” I’ve decided it’s necessary to toggle between micro- and macro-strategies.

Considering macro-strategies, the larger context in which the facts, concepts, procedures, and principles reside comes into play– the “why the instruction matters” or its  human impact. The learner’s context also plays a pivotal role—his or her motivational state in approaching the content and in demonstrating the desired performances (see, e.g., Keller, 2010; Malone & Lepper, 1987).

The evolution of CDT and beyond

Merrill subsequently expanded on Component Display Theory, developing Component Design Theory in which the focus was less on individual lessons and more on course design.  Merrill expanded his ideas of content types into 5 new categories:

A primary instructional strategy for handling any of these kinds of information categories can be broken down into: TELL, ASK, SHOW, DO. (For examples, see Table 3 in Merrill, 2008).

In later years, Merrill also proposed an alternative approach to ADDIE, the pebble-in-a-pond approach (2002), which I’ve described in a previous post. While comparing it to CDT is like comparing apples and oranges, there is the common idea that learners shouldn’t be required to sink or swim when it comes to learning experiences—scaffolding matters. The ideal design allows  learners to decide for themselves how much scaffolding they need. 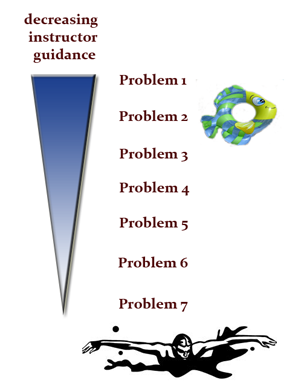 It’s 2012 and you may be wondering why I’m resurrecting an “old chestnut” like CDT.  And horrors, the “pebble-in-a-pond” approach is a decade old now! In Merrill’s reflection (2008), he notes:

The current zeitgeist seems to emphasize communities of learners, repositories of content, and electronic communication. There seems to be an assumption that information is sufficient and that [effective, efficient, and engaging] direct instruction is no longer necessary. The Internet is swollen with information, and amidst this flood, there are only isolated islands of [effective, efficient, and engaging] instruction.

I think that’s the ultimate lesson I take from Merrill—that the need to pay attention to the three “e’s” is still vital. A we correctly focus on the types of learning our target audiences access most often, informal learning, our role as instructional designers is not just to say, “Here’s content, have at it” or even worse to say, “Here’s someone else’s content, have at it.” We have something of a duty, as sense-makers ourselves, to give learners tools they can use to make sense of things. That’s the big picture we really can’t lose sight of.